We were asked to switch our WebEx backgrounds to a holiday theme for this year's virtual office holiday party. I went with "Christmas at Ground Zero". Because, you know...2020. 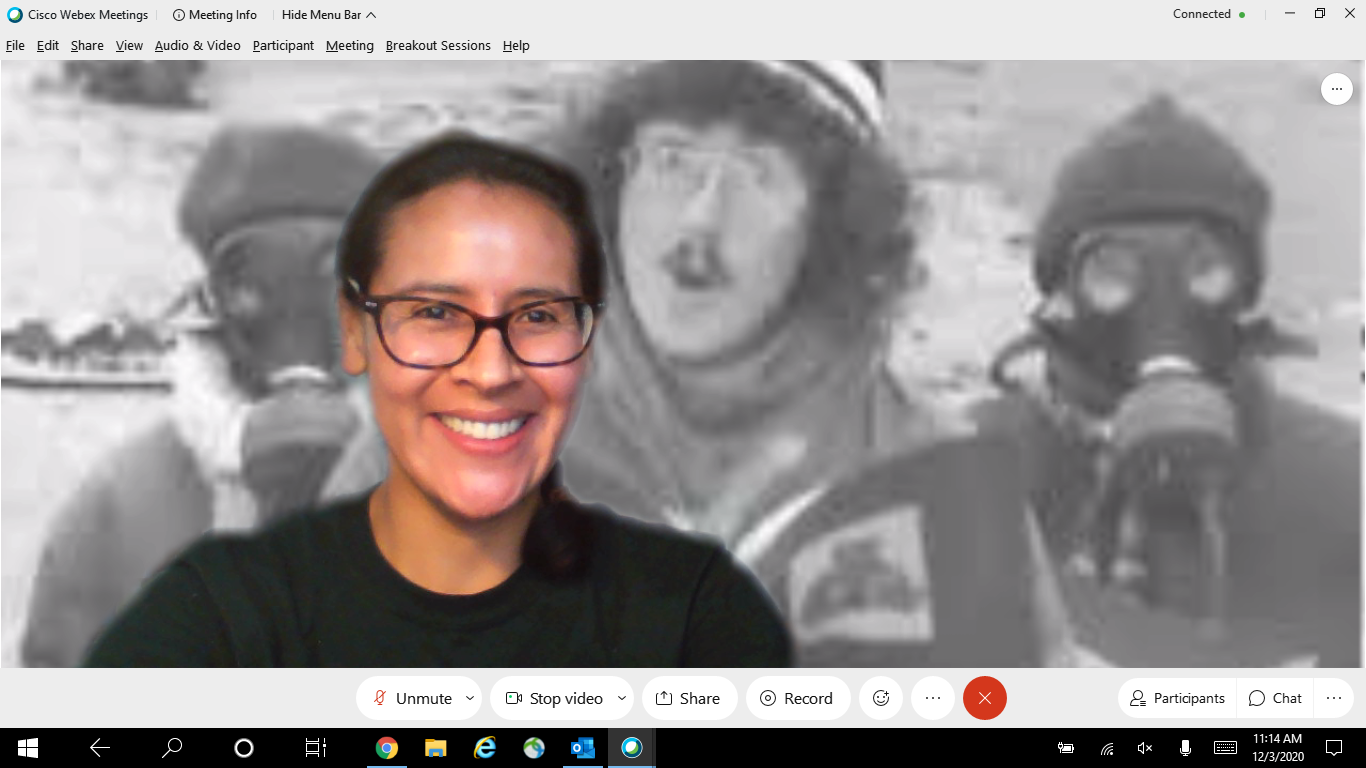 He comes by it honestly

The progeny of my progeny.is live!

I just finished inhaling Charles Frazier's canon and have arrived at two conclusions:

1) This is the correct order you should read his books. 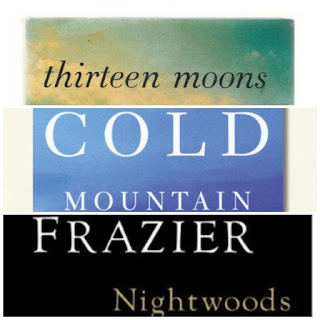 2) Charles Frazier should maybe consider getting out of the mountains of Carolina once in a while.
Posted by CEO - Motörhead Amalgamated Steel at 12/27/2018 07:02:00 PM No comments:

The End of an Era 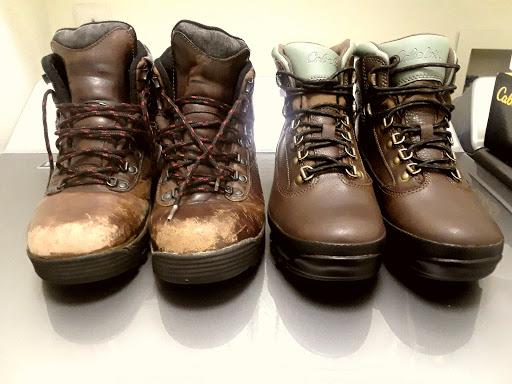 It's time to say goodbye. I bought those raggedy-ass Merrells 19 years ago. I nabbed them for a steal at Galyan's for an obscenely low price in the midst of a January blizzard. They have since carried me to four continents and through countless tumults. I would keep them forever, but, sadly, two repairs have failed to stick. The October Fairy brought me a new pair from Cabela's, and they are lovely. We'll see what they have to say for themselves in two decades.
Posted by CEO - Motörhead Amalgamated Steel at 10/25/2018 09:48:00 PM No comments:

The world has been put on notice

My old saw: the Venezuelan resistance will only reach critical mass when Venezuelan women are no longer able to straighten their hair. So, soon they'll plug in their hair dryers and flat irons and nothing will happen. 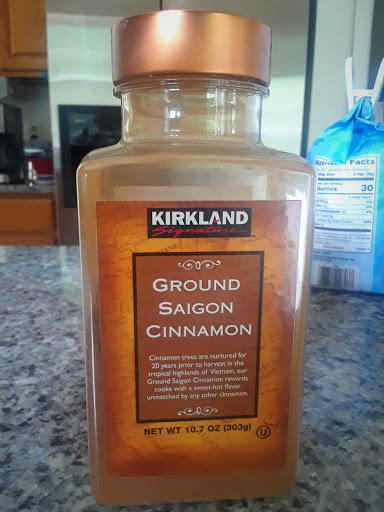 Amongst the many part-time jobs I held throughout college (Lego merchandiser, barista, receptionist), one of my favorite gigs was in the box office at the Center for the Arts on George Mason University's Fairfax campus.

I applied for the job during the winter of my sophomore year. After a four-year streak of consistently holding a part-time job, I had decided to take that fall semester off to focus on my insane course load (I had just started the process of double-degreeing) and disorienting personal life (I guess I was double-degreeing, in a manner of speaking, there, too).

After four months of nothing but studying, rehearsing, and zig-zagging between Fairfax, Alexandria, and Pittsburgh, I'd reached my limit. I decided to get a part-time job and resume being a more or less normal college kid. With no car, my only option was to get an on-campus job. As a music major, working at the concert hall was understandably attractive.

The job was straightforward. I would be expected to answer phones for a few hours a week, handle walk-up ticket sales, and work will-call on performance nights. Surrounded by other undergrads, with performances piped in to the box office speakers, it was a fairly low-stress and enjoyable job.

At that time, George Mason had a generous student ticket policy. It was quite easy for students to get free or heavily discounted tickets to pretty much any performance. Thus, many undergraduate arts and humanities professors required nominal performance attendance, the playbill or program or ticket stub serving as proof. We would routinely get calls at the box office from students and professors regarding ticket availability, particularly towards the end of the semester, when everything came due.

During our slow times, in addition to stuffing envelopes and folding programs, we would be expected to clear the backlog of voicemails that accumulated in the general mailbox. When returning calls made from on-campus numbers, we were often greeted with George Mason's standard outgoing message, homogeneously recorded by housing services: “You have reached the voice mailbox of [name 1] and [name 2]. To leave a message for [name 1] press 1. To leave a message for [name 2] press 2.” In larger dorm rooms, there could be four, five, or even six names on the menu.

Hearing this outgoing message absolutely made my day. I was beyond tickled that, not only were there two girls out there with the names Mahogany and Sangria, but that they had found each other, become friends or just roommates, and they were together. It just seemed so perfectly fitting.

I have since maintained an attentiveness to harmonious name pairings. I was baking a blueberry pie last week and the recipe called for cinnamon. I dipped my measuring spoon into my bulk cinnamon bottle and noticed the label: Kirkland Ground Saigon Cinnamon. It reminded me of my box office days and left me wistfully hoping that two girls named Saigon and Cinnamon would find each other, cohabit, and seek free admission to a concert this season. 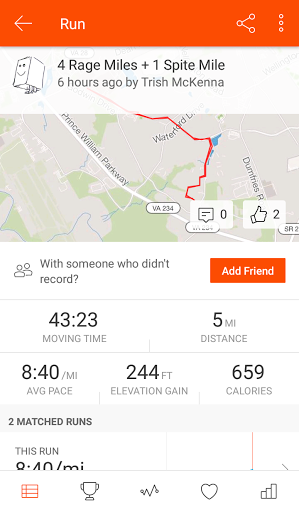 I posted 5 miles this morning. That's not unusual for me. From March through December, I typically log at least 20 miles a week.

Today, those miles were comprised of four rage miles and one spite mile. The rage miles were fueled by anger and frustration and helplessness. Someone I consider a friend, who holds a place in my life and who had become unexpectedly close, was traumatically injured in a car accident about 10 days ago.

The ramifications of this accident are becoming apparent; they will effect him and his family extensively and pervasively. I am doing my best to provide support, love, and care to them all. However, the nature of comas and traumatic brain injury leaves those surrounding the patient feeling helpless and sometimes hopeless.

Those four rage miles were pretty lackluster, ranging anywhere from 8:40 to 9:15, proving that I'm really a lover, not a hater. Apparently anger is junk fuel for me.

Over the course of our two month odyssey prepping, listing, selling, closing, buying and closing again, my friend and I spent a lot of time together. He was basically an innocent bystander unwittingly trapped inside a moving van or a storage unit or an empty house with a crazy woman for hours at a time. In that time, I managed to sell him on running as a panacea for regulating health, mood, and everything else.

He lives up on one of the Shenandoah region's many mountains, off a road that﻿﻿ switches back on itself repeatedly. His running route consists of three miles up and down the mountain. I convinced him to log his runs on Strava, partly because it tracks elevation gain as well as distance. And partly because I'm low-key competitive and really wanted to show this hearty and hale young fellow, 16 years my junior, what's what with running.

So that spite mile is for you, Michael. Because I don't want you thinking that I've been slacking while you take a break from running. I miss my virtual running partner and can't wait to give you kudos on your next run.